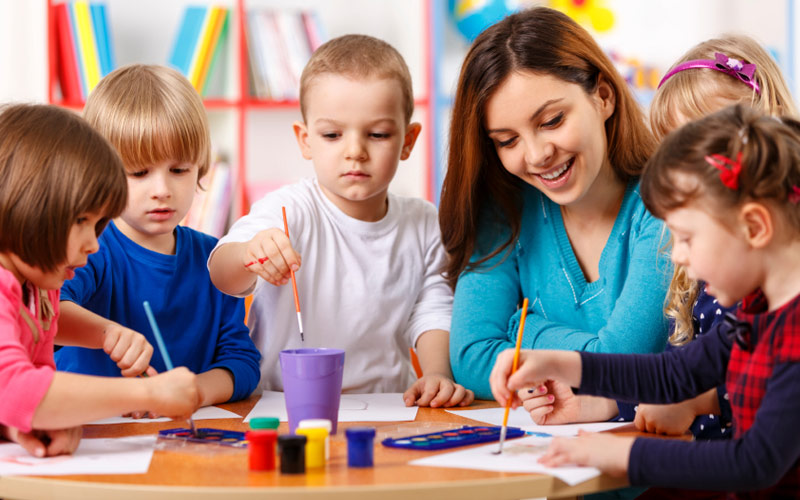 Well-designed program evaluations, designed to promote early child development, show that children who participate in these programs tend to be more successful in later school years, are more socially and emotionally competent, and show greater verbal and intellectual development during the school year. early childhood, unlike children who do not participate in quality programs.

The Benefits of Quality, DIT Programs in the United States: Numerous longitudinal studies have been conducted in the United States to demonstrate the benefit and effectiveness of child development programs for children living in poverty. These studies demonstrate the profound impact that early experiences have on adult life and productivity.

The positive findings of longitudinal studies are echoed in evaluations of early child development programs in developing countries. The following benefits have been consistently attributed to comprehensive programs in early childhood.

Better nutrition and health. By providing psycho social stimulation, ED programs can increase the effectiveness of health care and nutrition initiatives. These programs can also help ensure that children receive health care. For example, in Colombia, children who participate in the Community Child Nutrition and Care Project are required to complete their vaccination within six months of entering the program. Such programs can also monitor growth and provide food and micro nutrient supplements, as implemented by India’s Integrated Child Development Services Program, and can contribute to public health efforts such as mass vaccinations.

Higher school enrollment rate. The Promise Program, from Colombia, cited a significantly higher enrollment rate (in later years of schooling) among program children than among non-participants.

Lower rate of school repetition. Children who participated in the early childhood program repeated fewer grades and progressed more in school than non-participants in similar circumstances. The children of the Promise Colombian Program, from the Alamo and Fortaleza study in the Northeast of Brazil and those from the Argentine study had, on average, a lower repetition rate.

Lower school dropout rate In 3 out of 4 studies, the dropout rate was lower for children who participated in these programs. In the Dalai program in India (the only study where attendance was measured), school attendance in higher years was 16% higher for children aged 6 to 8 years. In the Promise program in Colombia, the third grade enrollment rate rose by 100%, reflecting lower dropout and repetition rates. On the other hand, 60% of the children in the program reached fourth grade, compared with only 30% of children in the comparison group.

Help for those at a disadvantage. There is considerable evidence that programs for early childhood benefit the poor and disadvantaged particularly. In India’s Aryan project, for example, dropout rates did not change significantly for children of higher socioeconomic status but fell dramatically by 46% for children of lower socio-economic status and by 80% for those of medium socioeconomic status ( Khachaturian et al 1987). A study conducted in Jamaica unequivocally proves that the nutritional supplement for malnourished children-most come from disadvantaged families-improves mental development (Grant ham-McGregor et al 1991). The programs in India and Guatemala resulted in a significant reduction in the age of girls’ enrollment, Advantages of early stimulation in boys and girls

Among the advantages of early stimulation in children , it is found that children develop faster social, emotional, motor and cognitive abilities. This process can be done since the babies are one month old.

This stimulation is done through activities usually carried out by their parents, in which their muscles are strengthened, the ability to react and reason, the safety to relate to other people and communication through words and sounds. Next we are going to name some activities of  early stimulation in children .

10 activities of early stimulation in A good activity for early stimulation in younger children is to give a small massage on the head and body of the baby, this should be soft, but cover each area of ​​the head and body. Early stimulation is a great tool that you can use to stimulate and encourage the physical, emotional and intelligence development of children. It is based on the fact that the sooner the potentialities are stimulated the more and the better a child can develop and the earlier. It is scientifically proven that early education favors the development of intelligence, which will give advantages in their social and emotional development.

Aspects covered by a stimulation program

Work time: It is about unfolding what each child can give at a certain stage of their development.

Gradual work: Although a series of aspects that are supposed to be those that can be developed at one stage of life are possible, early stimulation points to the potentialities that can always be developed in an ever-increasing trend. . The important thing here is that the child does not stop developing what he has to give and learn.

Learning about the environment: Among the benefits of early stimulation is the advantage of positively stimulating the child, so that he can learn from his environment based on instruction from his parents, relatives or technical specialists.

Finally, in terms of early child development, we have enough information about the effect that different programs have had on young children. On the contrary, we know much less about its cost and, therefore, about its cost-effectiveness. Having information related to costs is crucial. The evidence of the effects on children is conclusive but policy makers need to know the cost of reaching more children.